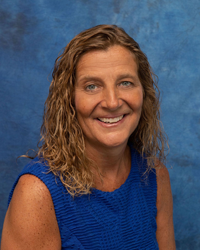 Mrs. Coad was born in Perryville, Kentucky, a small town of 800 people. She grew up on a farm with her parents and two sisters. She played basketball for nine years and truly does bleed blue for the Wildcats of Kentucky. She graduated from Eastern Kentucky University with a degree in Corrections and Juvenile Justice. After graduating, she moved to Norfolk, Virginia. While there she met and married her husband, Glenn Coad. Glenn and his family moved from New Zealand to the United States in the mid 1980’s. Glenn and Candace moved their family to Florida in 2001. They have three children; Trevor, Hunter and Kiri (all of whom attended St. John’s Academy). She has been a part of St. John’s Academy since 2001.