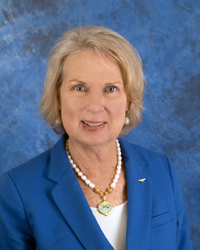 Mrs. Brooks received her B.S.E/ from Florida State University and her M.Ed. in Administration from the University of North Florida. She taught in the elementary grades at San Jose Catholic School in Jacksonville and served as Assistant Principal at both Ortega and King’s Trail Elementary in Jacksonville. In 1995, Mrs. Brooks was among a group of local parents who wanted an academically rigorous Christian education for their children. The school they founded, St. John’s Academy, needed a qualified and experienced head of school; Mrs. Brooks was the natural choice. Little did she know that her job would become a passion. For 24 years now she has served as Principal, rallying students, parents, and teachers to love God with all their hearts, minds and souls. By her commitment to classical excellence and Christian Virtue, Mrs. Brooks continues to lead St. John’s Academy toward its promising future.

Mrs. Brooks and her husband Wayne, have one daughter, Wendi Brooks Howard, who was in the first graduating class from St. John’s Academy in 2003.